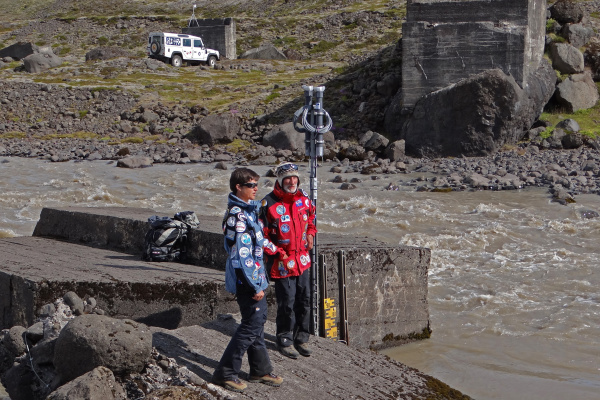 GLACKMA -Glaciers, Cryokarst and Environment-, is currently a non-profit Scientific Association founded in 2010 by Adolfo Eraso and Mª del Carmen Domínguez. It began its origins as the GLACKMA project in 2001.

Author of the project:

GLACKMA -Glaciers, Cryokarst and Environment-, is currently a non-profit Scientific Association founded in 2010 by Adolfo Eraso and Mª del Carmen Domínguez. It began its origins as the GLACKMA project in 2001. This long history of carrying out work uninterruptedly in strategic places on the planet has led us to study the evolution of glaciers as natural sensors of Global Warming, integrating science, research, outreach, adventure and attraction to the unknown.
We have managed to develop a unique method in the world as an indicator of climate change. Through a continuous record of the melting in different selected glaciers in both polar regions, we have managed to find a very reliable indicator of the temporal evolution of Climate Change, as well as its distribution according to latitudes in both hemispheres.
From GLACKMA we leave a legacy for future generations of the changes that are happening on the Planet.

At GLACKMA we have managed to create a network of stations located on glaciers in the polar regions, measuring melting continuously at hourly intervals. Since 2001, 8.760 annual data have been recorded for each measured parameter and each station, from 2001 in the following places:
In the northern hemisphere:
• CPE-ALB-79ºN, in Svalbard
• CPE-KVIA-64ºN, in Iceland
• CPE-TAR-68ºN, Swedish Arctic
• CPE-OBRU-68ºN, Northern Urals
In the southern hemisphere:
• CPE-KG-62ºS, in the Insular Antarctica
• CPE-ZS-51ºS, in Chilean Patagonia
• CPE-HUE-49ºS, in Argentinian Patagonia
• CPE-VER-65ºS, in the Antarctic Peninsula

The polar regions are the best indicators of the climate on Earth and of those conditions that allow us human beings to live on this planet.
That is why our goal was from the beginning, to implement glaciers as natural sensors of global warming, using them as a continuous record to estimate both the temporal evolution of climate change and its distribution according to latitude in both hemispheres.
Putting this ambitious project into practice, keeping it running for decades and continuing to think about its existence in the short and long term, has been and is full of difficulties. Impossible to detail them here in a few lines. They are of all kinds, at the administrative, political, financing, economic, logistics and survival levels.
We are aware that when we are no longer on planet Earth, the data we are collecting will be truly valued and they will know how to use this precious treasure as it deserves

So far, with the data series generated (in all the stations of the GLACKMA Project), the following behavior is observed:
• Exponential growth of melting at all stations (the two furthest from each other are more than 16,000 km apart, which confirms the global nature of this process).
• Any variation in the ambient temperature entails an immediate response in the melting. Their relationship is direct. This is very important from a strategic point of view in the experimental design of the project.
• At the same latitude in both hemispheres, melting is 3.5 to 4 times greater in the Arctic than in the Antarctic.
• The Arctic station of Svalbard at 79ºN latitude and that of the Insular Antarctica at 62ºS latitude, present practically the same amount in the value of the specific glacier discharge, that is, it is necessary to go up 17º of latitude in the Arctic, to find values similar to the Antarctic.
• During the summer, the glacier discharge in Antarctica doubled in 13 years, in the period from 1987 to 2000
• In the continuous and multiannual time series of melting in Antarctica, this has doubled between the summers of 2002/03 and 2005/06, and the number of days of duration of the discharge wave also doubled in those three years. (from 76 days in 2002/03 to 142 days in 2005/6).
• Rapid changes that occurred during the austral summer of 2005/06 in the Collins subpolar glacier of the Insular Antarctica station: generation of large cracks that did not exist before and the appearance of families of moulins (glacial wells) of considerable magnitude. These behaviors are more typical of temperate glaciers than of subpolar glaciers, as is the case here.
• Strong increase in melting in the subpolar glacier of the Insular Antarctica, which is increasingly approaching values typical of temperate glaciers.

The project started in 2001 and continues to be implemented today.